My impression of the PineBook Pro – a $200 ARM powered laptop

I have been able to try out the original PineBook, since one of my previous colleague did get one. She claimed it was a good buy and that she liked the machine. Well, considering that it only cost $99 – I think there is no real reason to think otherwhise!

However, fast forward to March 2020. My own ThinkPad Helix broke down on me and I was suddenly without a laptop. That meant that I longer could travel while I was “on call” at work because I no longer could remote in to work when I needed to. I also had no place to store my stupid collection of webm's either. Also, I was not willing to spend to much on a machine – so I had two options: – Get an used Librebooted ThinkPad – Get the PineBook Pro

The choice finally fell on the PineBook Pro, because I have started to get an urge to start using non-x86 machines as my daily drivers, such as the PineBook Pro and the Blackbird POWER9 Desktop from Raptor Computing. I've always been weak for stuff that is not used by to many people, like a specific car model with a specific color (like my old Mazda 3 2010 with the “Celestial Blue” color) or just plain Motorola Phones (not at all popular in Sweden). That was the reason I started with Linux back in 2001, because Windows was everywhere and I wanted to be different – lol.

I placed the order on the 3th of April 2020, of the PineBook Pro together with some other essential stuff like: – PineBook Pro itself – USB-Barrel connector for charging – PCI-E to M.2 adapter – USB-UART(serial)

I did forget the USB eMMC reader, but that is something I could get a hold of via a local shop.

Finally, on June the 1st. I got the notification that the order has been shipped from Hong Kong. Pine64 has been very clear that there will be delay thanks to the current pandemic going on, and that is understandable.

I got the order delivered to my work on June the 4th, since I spend my days there and not at home. Here is what the package looked like: 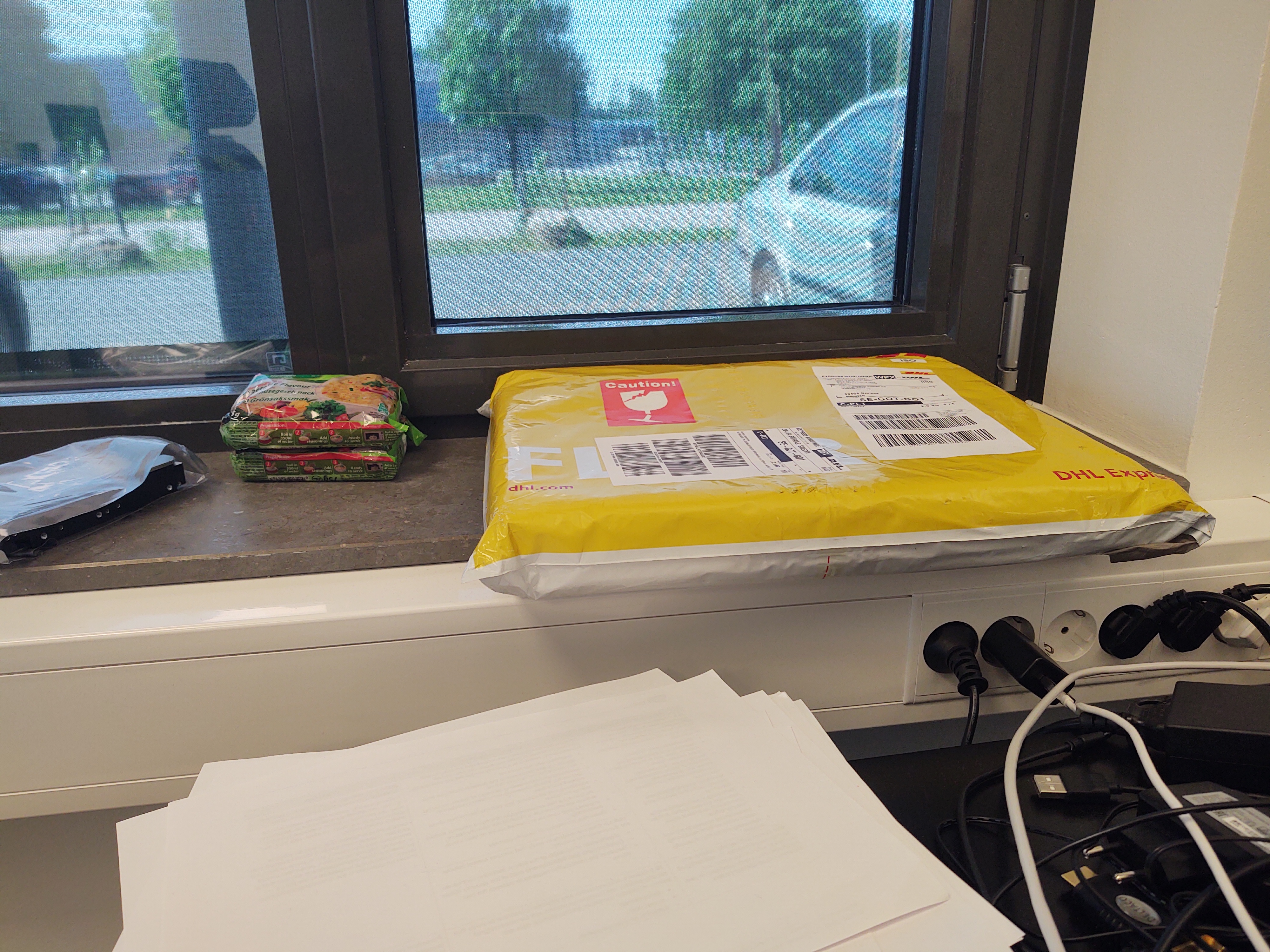 I waited to open the package until I came home, since I wanted to show you how the packaging looks like and what you as a possible future customer to Pine64 can expect with some good music that have a high chance of making you feel nostalgics: Note: The embedded video is broken in some browsers, feel free to check out the video here.

The Pinebook Pro looks slick, feel sturdy and does not flex that much you would expect from a $200 laptop. The rest of Day 1 was spent on trying to like Manjaro as a system. Manjaro works very well on the Pinebook Pro – it is snappy and looks great on it. If you are buying the Pinebook just as a “browser + ssh” machine (as someone on fedi called it) – I would recommend with sticking with Manjaro that is delivered with the Pinebook Pro.

I am not a fan of Manjaro, and trust me – I have really tried to like it! My personal feeling is that Manjaro is messy – but that is probably because I do not like Arch Linux at all. Anyway, I was thinking about switching over to Debian instead since I am more used to it and the image has come a long way since the first version. I flashed a MicroSD card with this Debian image, booted it and downloaded this scripts that installs Debian for you on the eMMC card. The installation took 15-20 minutes for me since I am blessed with a fast and stable internet connection. I did have trouble getting into the Desktop Environment on Bullseye (Testing), so I installed Debian Buster instead and that seems to have solved it. And I am want to use it as a daily driver so a stable system is not wrong :)

One thing that has started to bother me, is the battery take several hours to fully charge from zero. I have given that alot of thoughts and I think the reason is that I have become used to fast-charging that exist in most modern smartphones today. The VERY BIG PLUS, is that you can charge it several way's. You can use the official ROCKPRO PSU (the one that is stuck in my outlet), you can use a USB to “power” adapter, and you can also charge it with USB-C. The latter one is a HUGE advantage and one of the biggest “cool factor” in the Pinebook. That means that I can charge the Pinebook on the go. With an ordinary Powerbank, in my car or at someone elses house even if I forgot my own PSU.

What do I like/dislike?

After a few days of typing on the machine, I have come to like the keyboard of it. It does not feel bad at all. Since it is a ISO keyboard with a physical UK layout, I can use it with a Swedish layout in Debian. Luckily, I am very used to typing so I am not noticing that the physical layout is different since I dont look at the keyboard when I type. Writing this blogpost feels great too!

I started to watch a movie on the Pinebook with my headphones that I just plugged into the headphone jack, and suddenly all my kids came up to me and wondered what I was looking at so I took my headphones of and realized that the sounds was playing on the speakers and my headphone at the same time. I do realize that this is probably something that Debian Buster has issues with. I connected my Bluetooth headset instead and could watch in peace.

I wrote about that earlier, but it is worth mentioning here too. Charging the PineBook Pro does take a very long time. I have tested the charger that arrives with the machine and other supposedly “stronger” USB-chargers aswell. I think that the reason is that I have gotten used to Fast-Charging my phone and the ability to wait is something that we have lost the last few years. Anyway, the battery last 7-9 hours with normal use on Debian Buster with maximum screen brightness and “tilda” running in fullscreen with tmux with a couple of ssh-sessions – perfectly fine! Remember that you can charge it practically anywhere with almost any USB-charger whether it is a wall-plugged one, solar-driven or other powerbanks. That fact makes this machine very portable and flexible. Perfect for the trip!

I can compress my experience to this sentence: The more I use the PineBook Pro – The more I realize that THIS is the laptop I always wanted!

Wow, that's is pretty big words! I will try to explain why. First of all – The Pinebook Pro is the result of the hard work of the team over at Pine64. The machine have been made “as a community service” to provide a cheap, hackable and fun laptop to hackers, advanced users and pioneers on the AARCH64 platform. I really get the feeling that there is no greed for revenue unlike other companies – that is worth supporting!

The machine is not made for with planned obsolesce – the scary and sad trend that is going on with Tech-companies nowadays. You can buy every single part of this machine from the Pine64 shop so you can repair it if you need to.

The community is great! I have been hanging out in the Pinebook Pro chat on Matrix and the folks over there is very helpful and exited over the product that Pine64 has released.

Atlast, I think most of the Pinebook Pro users would love to use Manjaro ARM that is by default shipped with the machine. Manjaro has done a great job on increasing performance and stability of the builds and it does not seems to stop! I will cover more aspects of the Pinebook Pro in the future, like Multimedia performance such as video-playback, simple gaming, USB-C docking capabilites and Installation of the M2 drive.